Alzheimer’s disease has unfortunately touched our family as it has for far too many families. Michael’s father, Stanley, was recently diagnosed with Alzheimer’s disease and it is slowly taking away many of Stanley’s fond memories of his grandchildren, daughter-in-law and sons who all adore him. It is so sad to see a man who is so brilliant, accomplished and loving, impaired with this disease.

Stanley is a brilliant man, who cared for so many in his life, starting with his own sister and mother after his father left them while Stanley was just a boy. He is respected by so many from his professional life as being fair, honest, caring and professional. To this day, we encounter his former employees that say, “Stan was the greatest boss I ever had, there will never be a company that treats its people like AlphaNet (the company Stan founded and ran)”.

Stan is very proud of his two sons, Michael and David. He constantly says how blessed he is to have Erica, his beloved daughter-in-law by his side. He is amazed by his grandchildren – he loves to watch Olivia and Lilly dance, and hear of his grandson’s Liam and Luke as they excel in robotics and athletics. We all strive to live our lives in the manner in which Stan lives – a consummate gentleman who cares deeply for his family, meticulously groomed and physically fit, with a competitive spirit (especially now when playing rummy)! 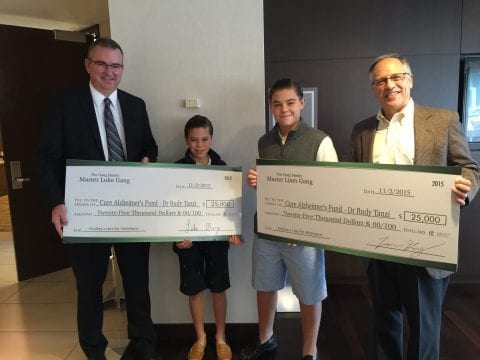