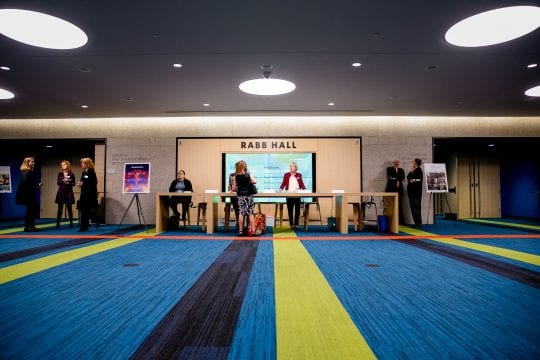 On October 19, 2017, Cure Alzheimer’s Fund hosted its 7th Annual Symposium featuring scientists Dr. Rudolph Tanzi and Dr. Robert Moir. Dr. Tanzi provided an overview of the groundbreaking research Cure Alzheimer’s Fund is supporting and Dr. Moir explained how infection in the brain may play a contributory role in the disease.

Dr. Tanzi allayed any fears that Alzheimer’s research was straying. Because clinical drug trials targeting amyloid (a protein that accumulates in Alzheimer’s patients) have so far failed, some scientists have voiced concerns that amyloid may not play a causal role in the disease. We now know that disease pathology begins decades before detectable cognitive symptoms, which means treatment needs to initiate well before this point. Tanzi likened attacking amyloid plaques to blowing out the match that started the forest fire. We need early prediction, early detection and early treatment. Further, mice models, which typically help identify disease pathway ripe for therapies, failed to model an important step in Alzheimer’s pathology – the spawning of tau tangles from amyloid. To better model the disease, Doo Yeon Kim, Tanzi and colleagues, with grants provided by CureAlz, developed Alzheimer’s in a Dish. Alzheimer’s disease was simulated in a 3D gel containing human neural stem cells and, in this environment, amyloid plaques DID lead to tangles.

The reason why amyloid is so harmful is because two of the three enzymes that cleave amyloid precursor protein (beta secretase and gamma secretase) form long amyloid beta fragments that can clump together as toxic oligomers and form plaques. With CureAlz grants, Tanzi and colleagues developed a gamma secretase modulator that cleaves shorter fragments that are far less likely to clump. The hope is that this discovery can lead to a way to reduce or eliminate amyloid oligomers and plaques.

Based on this discovery, Tanzi has added neuroinflammation to the Alzheimer’s in a Dish model and they can now use this tool to see if drugs, already approved by the FDA for other diseases, also target amyloid, tau or inflammation. The hope is they will find at least one that hits all three targets. If they find an already approved drug that can take on Alzheimer’s, it may move through the approval process relatively quickly because safety measures have already been met.

Women are almost twice as likely to get Alzheimer’s disease as men. Scientists are examining whether this gender bias occurs due to changes after menopause, AD vulnerable gene mutations that are selectively passed onto women, or to some other factors. CureAlz and Rotary International jointly funded a study that helped Tanzi and his colleagues discover a gene candidate that may play a role in the increased prevalence of Alzheimer’s in women. A study further examining this gene is now underway.

Dr. Robert Moir told us about some promising research based on his findings that in addition to the menacing role amyloid has in Alzheimer’s disease, it may initially play a protective role in the brain as an anti-microbial peptide. The infection theory was initially proposed by Alois Alzheimer in 1906, but upon discovery that plaques were produced by the amyloid beta molecule, the infection model moved to the sidelines. Moir never let the theory go however, because he reasoned that since amyloid had been around for 400 million years, it must serve a useful purpose.  Mutations or extinction would surely occur if its role were superfluous. Further, amyloid follows many of the rules of anti-microbial peptides such as clumping, forming fibrils and having both protective and harmful effects.

To study its possible role as an anti-microbial in human Alzheimer’s disease, Moir sought to directly study amyloid’s role in human brain rather than relying on animal or cell culture models. He and his collaborators studied brain microbiomes from people who did and did not have Alzheimer’s disease. Those with Alzheimer’s exhibited dysbiosis (an unhealthy microbiome balance). When comparing the two sets of brains, Moir identified one of the main pathogens that ran amok only in brains of those with Alzheimer’s. Because this pathogen only infects humans, Moir is continuing to study it using Alzheimer’s in a Dish. This study is still in progress, but it has been established that when infected with the pathogen, amyloid accumulates within hours. The dysbiosis model predicts that amyloid will activate immune pathways and eventually trigger neurodegeneration.  Therapeutic strategies that restore health to the brain’s microbiome may alleviate the problem. Fortuitously, it turns out that the vagus nerve, which extends from gut to brain, may be able to deliver healthy microbiota from the gut to the brain, and vice versa.  So, delivering treatment to the gut may be a means to fortify the brain. So far, the results are promising, but Moir cautions it is still early days. Stay tuned.