On Sept. 6, 2012, 30-year-old Brett Reynolds flew to London to swim the English Channel. Reynolds took on this challenge to honor his grandmother, who suffered from Alzheimer’s disease before passing away. “I wanted to raise money to help stop the disease and to honor her memory,” says Reynolds.

His goal was to raise $5,000 for Cure Alzheimer’s Fund—which he well surpassed, raising more than $8,000. “I wanted to support an organization focused on finding a cure,” says Reynolds. “I was impressed with their vision and believe in their entrepreneurial approach.”

Native Southern Californian Reynolds is no stranger to water, having grown up playing water polo, eventually winning an NCAA championship at USC and playing for the U.S. men’s team in the World University Games. Still, this task posed unique challenges.

Only 10 percent of people who set out to swim the channel actually succeed. Stretching 21 miles from Dover, England, to Calais, France, it can take anywhere from seven to 18 hours to swim across. But it’s not the distance that makes the swim so difficult. 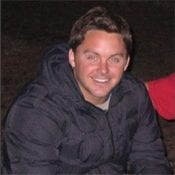 The channel is the world’s busiest seaway, with more than 700 commercial ships and ferries running through it daily. With water temperatures between 59 and 63 degrees and no wetsuits permitted (to make the swim “official”), hypothermia and cramping are severe risks. Still, the biggest threat is the currents, because every six hours or so they change direction. If swimmers get the timing wrong, even if they’re in sight of the coast, they might as well give up, because they’ll only be swimming backward.

To make the crossing official, swimmers cannot touch their guide boat (necessary to provide food, water, light and encouragement) or another person at any time during their swim, and they must present a passport when arriving in France. Despite all these challenges, seasickness was Reynolds’ biggest concern.

Reynolds began his journey at 3:30 a.m. on Sept. 7 in darkness, with his mom cheering him on from a chartered boat. “She is the only one of my family and friends who doesn’t succumb to seasickness,” says Reynolds.

Three hours into his swim, Reynolds experienced pain in his right shoulder, which unfortunately stayed with him throughout the race. Toward the end, he began to show signs of hypothermia, but seasickness wasn’t an issue. “Swimming the channel was a humbling experience,” he says. “I never would have made it without the support I received from so many friends and family on (and off) the boat.” Reynolds completed his swim in just 12 hours and 5 minutes. We are thrilled with Brett’s accomplishment and incredibly appreciative of his fundraising efforts.