Dr. Griciuc received her M.Eng. in biotechnology from INSA-Lyon and M.Sc. in biochemistry from the Max Planck Institute of Neurobiology (Munich) in 2006. She then became a fellow of the European Union Research Training Network “Marie Curie-Neurotrain,” and received her Ph.D. in neuroscience from the Helmholtz Research Center Munich in 2010. Dr. Griciuc is the recipient of the 2011 Graduate Student Award in Environmental Health Research.

Furthermore, Dr. Griciuc investigated crosstalk between the microglial receptors CD33 and TREM2. Dr. Griciuc showed that TREM2 acts downstream of CD33 in modulating microglial pathology in mouse models of AD. Her research suggests that inhibiting CD33 and/or increasing TREM2 activity represent potential therapies for AD. Most recently, Dr. Griciuc showed that early intervention using an AAV vector-based system encoding an artificial microRNA targeting CD33 reduced Aβ accumulation and neuroinflammation in mouse models of AD. Her current research projects focus on investigating the function of CD33 and TREM2, and how mutations in these genes result in susceptibility to late-onset AD. 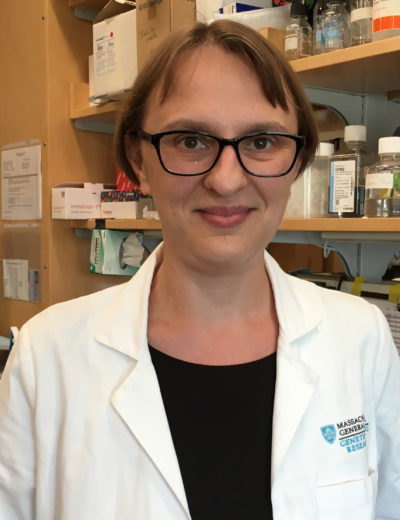