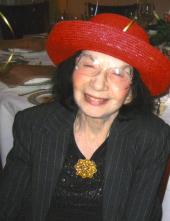 Miriam Violet Monasebian (May 8, 1924 – July 7, 2014) was born in Passaic, New Jersey to Rose and Abraham Weinstein.  She was a child during the Great Depression and became a young lady during World War II.  She met Sion in 1946 and was married on August 23, 1947 in New York.  She raised four sons and one daughter, and had six grandchildren and four great-grandchildren.  She was an extremely intelligent, wise and worldly woman.  As a young adult, she spoke six languages and read Latin.  She learned to speak Farsi by studying from a language translation book in order to converse with her husband Sion’s parents who were from Tehran, Iran and could not speak English.  As a mother, grandmother and great-grandmother she always provided unconditional love and support to her family.  She left a lasting legacy that today is central to the core values of her children and their children.